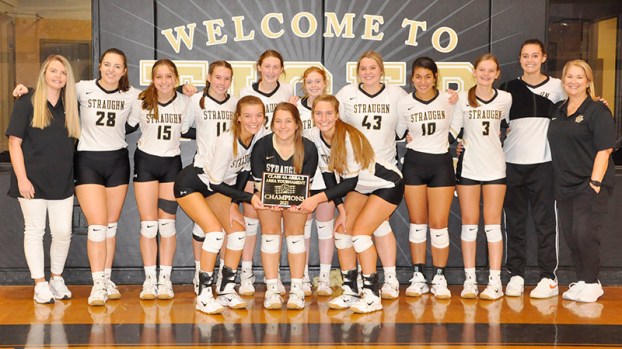 Straughn bent did not break and rallied by Dale County and Ashford to win the 4A Area 2 Tournament at home Wednesday.

Head Coach Deidra Burleson liked having a tough match going into the next round. “We’re going into regionals, and it doesn’t matter what happened in the season. We were undefeated in area coming in, but you need that kind of play and should expect it. We should have won bigger because I always expect more from my girls and know what they can do,” she said. “I’m really happy and proud of them, but we always have room to grow.” 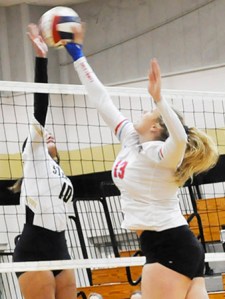 Straughn’s Alyssa Richardson, left, and Dale County’s Whiddon Armstrong battle for control of the ball in a 4A Area 2 semifinal match.

The Tigers (25-6) got off to a 3-0 start in the semi-finals with an ace by Katelyn Dewrell and a kill from Ella Grace Wood. A.J. Singletary delivered a kill to stretch the lead to 6-3, but the Warriors responded with a 10-2 run and took a 13-8 margin. Momentum swung back to the hosts after a 12-2 surge. Dewrell had three aces while Wood added a pair of kills to propel SHS to a 20-15 lead. DCHS crept back within two before Kaylee Murphy used an ace to make the score 22-18. Hannah Albright closed out the first set with a blistering kill, 25-21.

Both teams went back and forth early in the second set. Dale County grabbed a 5-4 lead but quickly went cold when Straughn went on a 10-0 tear. Two more kills by Wood coupled with an ace from Ora Hall and a kill off Claire Howe pushed the score to 14-5. After DCHS cut the deficit to 16-8, back-to-back kills from Carlin Bates and Albright jump-started another scoreless drought from the opposition. Dewrell delighted with three consecutive aces as Wood hit a powerful kill to give SHS a 23-8 cushion. The Warriors stayed alive with four points in a row, but Wood reached set point with a kill. Murphy used an ace as the Tigers took the frame, 25-12. 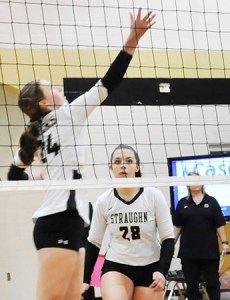 Ora Hall, left, looks to make a big play for the Tigers on offense as Carlin Bates remains focused.

DCHS seized early control of the third set with a 4-1 lead. Hall followed with a roaring kill, and Singletary nailed an ace as SHS drew even at 4-4. After falling behind again, Albright knocked a kill and knotted the score at 7-7. The Warriors built a 10-8 cushion until Alyssa Richardson and Hall had other plans. The Tigers scored five of six for a 13-11 lead. Dale County regained control to take a 16-13 advantage but faltered hard down the stretch. Wood began a photo finish with a block and kill. Albright added three kills during the 12-1 run as Straughn polished off the sweep, 25-17.

Dewrell led the charge with 7 aces, 14 assists, and 3 digs in the win. Wood had 11 kills and 3 blocks followed by Albright at 8 kills. Richardson added 2 blocks as Singletary earned 2 digs. 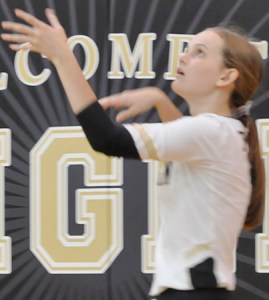 Katelyn Dewrell prepares to make a serve to Dale County.

AHS pulled away from a 3-2 lead in the first set and grabbed the upper hand for a 10-5 margin. Three kills from Albright and two by Wood brought action back to square one with a 12-12 tie. Both sides went point-for-point as Albright gave SHS its first lead at 18-17. The visitors took it right back and led 20-19 until Richardson widened the margin with a kill. Hall executed an ace as the hosts escaped, 25-23.

Straughn began the second set with a 2-0 lead only to see it dissipate quickly. Kills from Wood, Bates, and Albright kept action close until Ashford pulled away and led 10-6. Murphy had an ace for a 12-12 deadlock, and another kill by Bates gave the Tigers a 14-13 lead. The Yellow Jackets fought back and regained command with a 21-18 cushion. The visitors would not score again as Singletary reached set point with an ace. Wood ended the 7-0 swing with a blistering kill for another hard-fought win, 25-21. 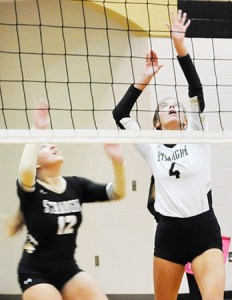 A.J. Singletary, left, and Ella Grace Wood wait for the ball to come down during Straughn’s 4A Area 2 championship match against Ashford.

Aces off Dewrell and Murphy helped SHS open a 5-1 lead in the third set. AHS did not let up and answered for a 7-6 advantage. Kills by Hall and Richardson swung momentum right back to the hosts and an 11-7 cushion. The runs continued as the visitors had another response to lead 12-11. Wood gave the hosts a 17-16 lead with a kill before the visitors were in good shape to force a fourth set leading 23-21. That never came to fruition as Straughn scored the last four points and stunned Ashford, 25-23. 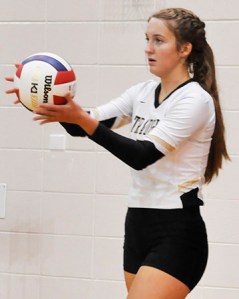 Hannah Albright looks to make a powerful serve to the Yellow Jackets in the area title contest.

Straughn advances to the South Super Regional in Montgomery next week and meets Area 6 runner-up American Christian Thursday, Oct. 21 at 9 a.m. “They pulled together and played as a team. Now, we just have to push forward and go from here,” Burleson said.