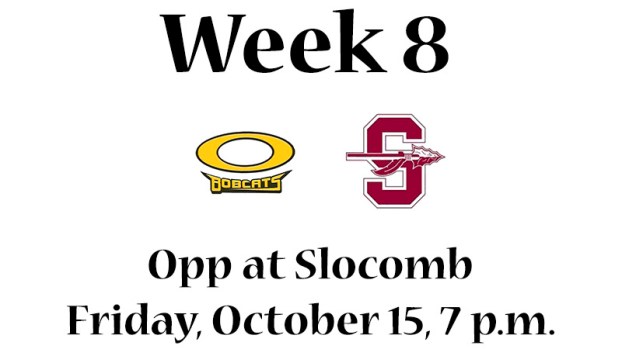 The Bobcats thumped Wicksburg at home last time out, 49-6. The Red Tops routed Daleville on the road, 57-0.

Head Coach Mike Dubose said the win against Wicksburg was an important one for his team.

“I thought it was going to be a game we would have to play the full four quarters to have a chance to win. We ended up getting a little bit of a lead and holding on to it. Our kids responded to the challenge of playing in a big game, and our seniors gave us great leadership. We played well on offense, defense, and special teams, and it gives us an opportunity this week to play for a region championship.”

Dubose added that Slocomb is very skilled and talented. “They have two really good players who play a lot of different positions. They have skill guys who can make plays, and we will have to play extremely well in all three phases again,” he said. “We go on the road, so it will be a challenge for us. We look at challenges as opportunities and are excited about the opportunity to go out and play.”

The two teams will meet for the ninth time dating back to the 2010 season. Opp has a 5-3 lead in the series and has outscored Slocomb, 236-163. Each game has been a region contest except for one. The two squared off in the second round of the playoffs in 2014.