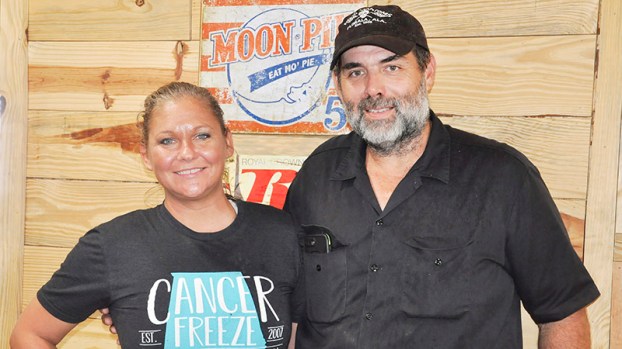 Hall’s Country Store owners Amanda Stewart and William Hall are grateful to have the opportunity of serving breakfast and lunch in the Antioch community.

When an unforeseen kitchen fire occurred at Hall’s Country Store, the incident became a blessing in disguise for owners Amanda Stewart and William Hall.

The store was first built by A.L. Leonard Page in the late 1960s and has seen numerous owners. Robert and Carolyn Hart were the most notable owners of the Antioch-based store for 24 years.

Stewart, who holds a degree in business and marketing, said, “The store had been open under Hall’s name since October 2018. They closed in December 2018 for restorations that included redoing the walls and moving the kitchen before reopening in March 2019. I started helping them manage and work in financials until recently when we decided to take it over.” The store held its grand re-opening Tuesday, Sept. 21.

Stewart stated she and Hall chose to take ownership because of her educational background and cooking passion. “This falls into suit with my education. My mother owned the Penny Mart in Andalusia back in the day, and I helped her manage that as a teenager. It is a little bit more stressful doing this on a grand scale for hundreds of people a day but is enjoyable to please people with your food. It’s a lot of fun coming up with different ideas for the menu, and I’m certainly in familiar territory.”

The kitchen fire occurred on a day Stewart was off work: Saturday, Sept. 11. “Initially, I was crushed because I had been putting in 15 hours daily six days a week. I even came up here on my off days for five or six hours to try and turn the place into more of my vision,” she said.

Stewart said the incident almost felt like a blessing in disguise because it gave them downtime to work on the establishment. “There were things in place we needed to work on getting done like moving coolers, fixing the lights, moving televisions, and doing a lot of cosmetic work. We also needed to organize the kitchen and do a deep clean, so the fire gave us an opportunity to do all that. It was not something we expected to happen, but it turned into a positive for us.”

She explained her employees were unsure of how exactly the fire started. “I was off when they called me. They heard a big pop and couldn’t put it out with the fire extinguisher. There was fire everywhere, and when I got here, all you could see was smoke coming out of the building. From the pictures I saw, it looked like my entire stove was in flames. The fire department had to go in through the attic and cut padlocks on the front because I couldn’t get the keys, which were inside. It was just a huge mess.”

Stewart found out the damages were not as bad as they appeared once everything calmed down. “I had cameras up and actually got to watch what happened with the fire that night. The fire wasn’t as bad, and there may have been a little bit of an overreaction. You can’t blame people for trying to protect themselves when nobody is at fault,” she said.

Hall’s currently offers homemade biscuits, country ham, bacon, made-to-order eggs, and tomato gravy for breakfast along with a wide variety of homemade country cooking for lunch. According to Stewart, the lunch menu changes daily, and they have considered a dinner option. “We are still working on getting the store stabilized. As soon as we do that, we have a goal in place to have a steak and potato salad night,” she said.

In addition to the cosmetic changes, Stewart said they are also adding a grocery section. “This will allow people to come get some of their groceries such as milk, eggs, sodas, and canned goods. They will also be able to get a lot of the food I’m able to order and cook either in bulk or by the package.”

Hall’s Country Store is open for breakfast and lunch from 4 a.m. until 6 p.m. Monday through Friday, 4 a.m. until 2 p.m. Saturday, and 9 a.m. until 3 p.m. for lunch on Sunday. For more information visit their location at 24454 Antioch Road outside of Andalusia or call 334-222-9257. “We are a complete family here and view our employees as our family. We want to give this place back to the community. A lot of people from this area live out of this store, and we’re ready to see their faces again,” Stewart said.