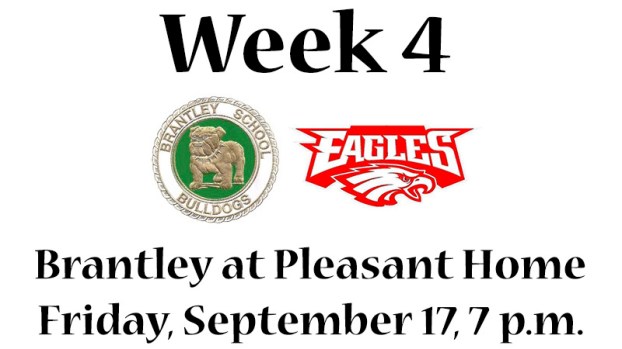 The Eagles fell short to Samson last week at home, 18-0. The Bulldogs were scheduled to play McKenzie but received a forfeit win. BHS has only played one true game this season, a 34-0 shutout over Kinston.

Head Coach Jeremy Silcox said Samson was a well-coached, physical football team, and the highlight of the game was the PHS defense. He stated, “Our defense played really well and kept us in the ballgame.” The offense did not fare as well. “We had some costly penalties and turnovers at some inopportune times,” he added.

Pleasant Home will have a tall task ahead with Brantley. “They had one of the best offensive lines in the state last year with a ton of seniors. This year, they are really experienced at the skill positions. They have several seniors and juniors all over the field. Their quarterback (Tucker Kilcrease) is really good at recognizing the defense and being in the best position possible. Coach (Roland) Jones always does a great job, and will no doubt have them ready to play,” Silcox said.

He added they are looking to improve every week and continue to grow as a team and program. “We have several items to address throughout the week and look forward to improving. Every day, we find tweaks, improvements, and adjustments in personnel, execution, and coaching.”