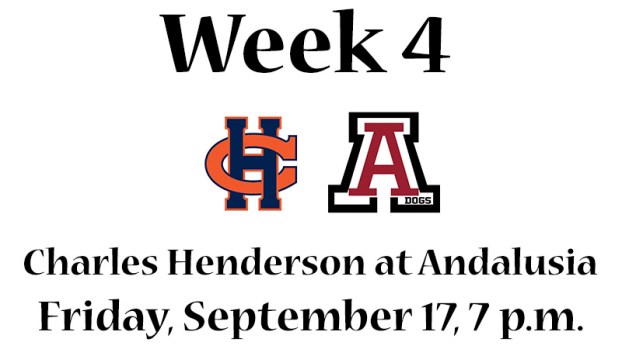 The Bulldogs went to Pike Road and held a 14-7 lead after the third quarter but came up short, 28-14. The Trojans lost to Early County out of Georgia in non-region play, 31-9.

Head Coach Trent Taylor said his guys fought hard against the top-ranked team in Class 5A last time. “Their talent won out in the end, but golly, our kids played extremely hard. We came back on Monday to look at the film to see what mistakes we made for us and to go forward.”

Taylor said Charles Henderson is a very young football team going through a coaching change, but the emphasis this week has been more on Andalusia.

“Penalties and turnovers have been pretty much the name of the game for them, but that’s expected with young players. The scary thing is that they’re very talented, and when they eliminate those things, they will certainly be a force. We just hope it doesn’t happen to be this Friday night. Their kids play really hard, and that’s what jumps out to us off the film. It’s another region game and a big one for both teams, so we’ll have to play.”

Quinn Hambrite is in his first year at Charles Henderson and second year overall with a 2-11 record. “Coach Hambrite is doing a great job, and they’ve been competitive in every game but one,” Taylor said.

AHS first met CHHS in 1923 when it was known as Troy. This will be the 80th all-time meeting between the two programs. It has been a tight series with Charles Henderson holding a 38-37-4 lead.

The Bulldogs snapped a seven-game losing streak to the Trojans with a 45-12 rout last season. Andalusia handed Charles Henderson its previous loss before 2020 at home during the 1996 season, 28-17.