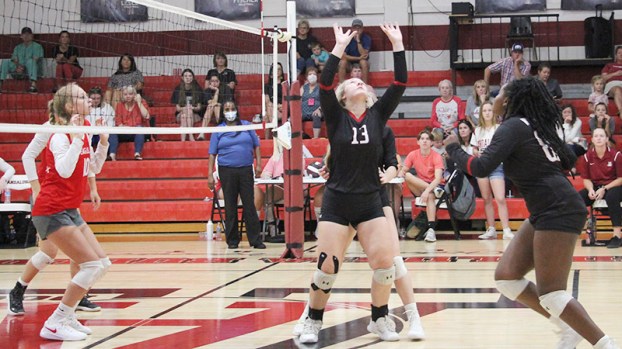 AHS Head Coach Angie Grimes said it was a great game, and her girls played very tough and scrappy. “When you look back, it was errors. Miller is a great team and very solid, but they’re not beating us. When we look at our errors, we’re beating ourselves up. In games that close, you can’t hit the ball out and have missed serves. I honestly think stuff like this is going to make us so much better, and we will see everybody again. We’re going to fix what we’re doing and come back stronger than ever. We had some good blocks and a lot of good plays, and I’m proud of the girls.”

TRM Head Coach Terri Lynne Thompson added they were excited to take a win against a good Andalusia team. “Consistency was an issue for us at times, but I’m proud of the hustle the girls continued to play with after losing the third set,” she said.

Sarah Beth Grimes picked up an ace to give the Bulldogs (3-3) a 2-0 lead in the first set. The Tigers (13-5) then opened up a 6-4 margin before Ashland Kelley and Anna Duffy evened the score at 6-6. T.R Miller started to pull away with an 8-3 surge to shoot out to a 14-9 advantage. Grimes used a kill to draw Andalusia within 14-10 before six straight went the other way. Whitney Warren sliced the deficit to 20-12 with an ace, but a kill by Darby Gibson and ace from Kate Najor made it set point. Despite five straight points from the Bulldogs to trim the hole to six, the Tigers held on, 25-18, for an early lead.

Najor had three aces as TRM began the second set on a 7-2 surge. Zion Williams brought AHS back to 7-4 with a block as Kinsley Byrd used a kill and ace for a 9-6 lead. Two kills by Kelley and another ace from Ward drew the Bulldogs even at 9-9. The Tigers responded and grabbed a 12-9 lead. Williams and Warren kept Andalusia within striking distance at 12-11, and another kill from Kelley made it 17-16. Duffy evened the score at 19-19 with an ace, and Williams earned a kill to break even at 20-20. Ansley Till delivered a big kill to give T.R. Miller a 23-20 lead and ultimately the set, 25-22.

After Williams gave Andalusia a 1-0 lead in the third set, Rebekah Rowell had four straight aces to change hands and put T.R. Miller in front 5-1. When the lead grew to 9-4, the Bulldogs roared back with a 6-1 surge to even the score at 10-10. The Tigers maintained their lead until Kelley gave her side a 17-16 lead. TRM had a response as Madelynn Sasser had a kill along with an ace from Byrd to make the score 21-19. Consecutive kills by Williams and Warren jumpstarted a photo finish and allowed AHS to stay alive with a third set win, 25-23.

Both sides were even in the opening stages of the fourth set. The Tigers then pulled away for a 7-4 lead before the Bulldogs took it right back. Kate Day used an ace to knot the score at 7-7, and Williams delivered a mighty kill for an 8-7 margin. TRM regrouped and took a 15-11 lead. Warren brought AHS within three on a kill, but attack errors by Andalusia proved costly. Jordan Jones made the score 21-14 with an ace as T.R. Miller closed out the tight match, 25-15.

Till led TRM with 12 kills followed by Caroline Williamson at 10 and Sasser at 8. Najor took 10 aces and 7 digs.