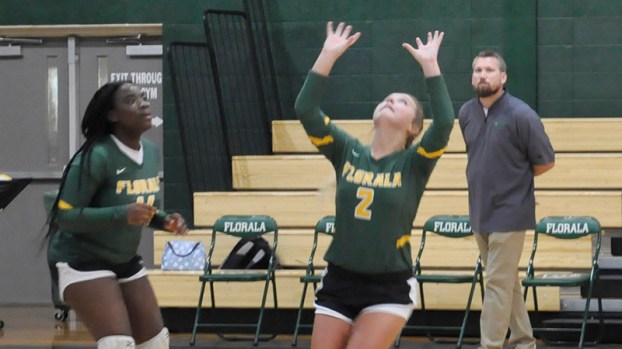 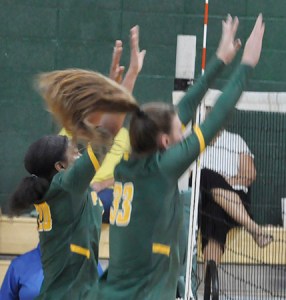 Kyndra Anthony and Chyenna Regan defend the net during a block against Samson.

The roles reversed in the second set as FHS began strong. Odom scored an ace for the first point, and Regan added a kill during a 3-0 start. SHS stayed close and forced a tie at 5-5 before Regan gave her side the lead back at 7-5 with two kills. Kyndra Anthony collected an ace to give Florala its largest lead at 11-8. Samson did not back down and used an 11-2 surge to take back control for a 19-13 lead. Another kill from Regan, her sixth of the set, and an ace from Varner trimmed the score to 19-15. A 6-0 visiting run put a cap on the second frame at 25-15.

Much like the first set, Samson ran out to a fast start and built a 4-0 lead in the third set. Regan delivered another kill to get Florala on the board, and Savannah Jones notched an ace to slice the gap back to 6-4. Both teams continued to give it their all as the Tigers eventually built a 13-9 margin. The Wildcats roared back with authority and seized some momentum with a 5-0 run. Two aces from Odom evened the score at 13-13 before Jones blistered a kill for a 14-13 lead. The two sides continued changing hands with the lead. An ace by Varner gave FHS its final advantage at 16-15. SHS stormed back to lead 23-19 and finished off the sweep, 25-21. 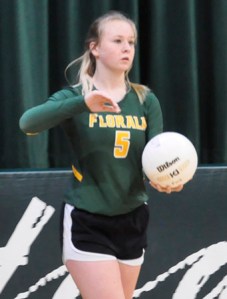 Megan Odom looks to make a big serve on offense for the Wildcats.

In the first match, Samson rallied back for a 2-1 win over the Florala junior varsity (2-3). The Wildcats won the opening set 25-17 before the Tigers evened the contest, 25-20. FHS held a big lead in the decisive third set, but SHS came back to edge out a 15-12 win.

The Florala junior high team (2-1) did not play Thursday but picked up a big win Tuesday at Geneva County.