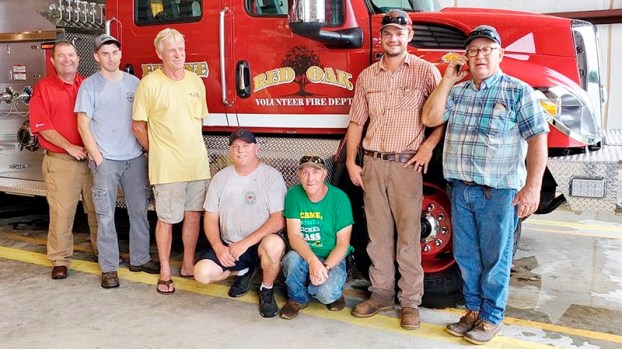 Firefighters risk their lives every day to protect the community, and pumper tankers are an essential piece of equipment to help rescue those in need.

The Red Oak Area Volunteer Fire Department was presented with a newer model Friday, August 20. Fire Chief Jonathan Norris said Red Oak was long overdue for a new truck after the previous one had been in use since 1980.

“It was the first pumper the department had in service. The truck had a 500-gallon tank and needed around $40,000 in repairs to get back to an operational pumper,” he said.

According to Norris, NAFECO based in Decatur, Alabama, provided the truck, which was built by KME Fire Apparatus in Pennsylvania. He stated the new truck would be a greatly improved addition and has a 2,000-gallon tank.

“When Red Oak is called to a scene, we will have 3,000 gallons of water available right away. That will save a lot of precious time and in return could be enough water to save someone’s property they have worked so hard to have.”

Norris felt the new truck would have a huge impact on the Red Oak community and the county as a whole. He said, “We will be able to assist neighboring departments when they have large fires, and there is not a hydrant close by. We can be called to assist with the water shuttle from hydrant to pumper on scene fighting the fire. The new truck with a 2,000-gallon tank will fill two pumpers at a time and have 1,000 gallons per truck.”

As an 11-year veteran of the department, Norris first joined Red Oak at the age of 16. He has served in his current role as fire chief for the last six years.

He offered heartfelt advice to individuals who are seeking to become firefighters. “You need to have a helping heart for neighbors in your community and for anyone passing through. Imagine if a family member is involved in an accident, or the house catches fire. It only takes one person to save a life, and that one person could easily be you if you’re willing to help your neighbor,” Norris said.

The volunteer fire department plays an important role in the community for several reasons. Norris explained, “Anyone who calls 911 will have a department on the scene a lot quicker. If we didn’t exist, the firefighters would have to come from Andalusia or Opp. In an emergency, every minute counts. When firefighters have to come a further distance to arrive on the scene, more time slips away.”

He added that city fire departments do not know every community and every road in each community like their colleagues. “The volunteers live in that community and usually know everyone who lives around the area.”

When dealing with intense situations, he said it is important to remain calm under pressure. “If you’re not calm, you will not think clearly. You will be putting your partners’ lives and the victim’s life in harm’s way more than it already is. You will be scatter-brained, and you’re not helping anyone at that moment.”