Remember When: The Traveling Gold Cabinet 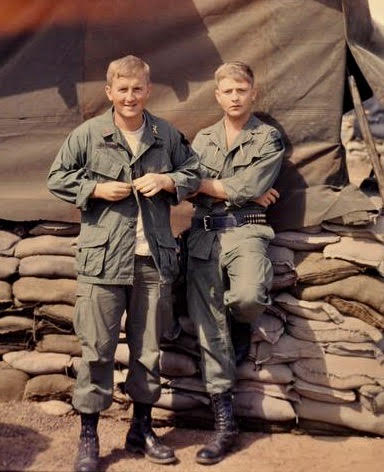 Warrant Officer Giddens was called Junior by his friends. One of his closest friends was fellow Warrant Officer Bill Gibson who had been with Junior through basic training at Fort Polk, Louisiana, basic helicopter training at Fort Wolters, Texas and through advanced training at Fort Rucker, Alabama where they were roommates. After graduation from flight school, they were both assigned to the 1st Squadron, 9th Cavalry Regiment, 1st Cavalry Division and sent to An Khe, Vietnam. They operated out of a base near the village of Bong Son. Junior brought along his 8-track tape player and Bill Gibson remembers listening to Otis Redding on the 8-track, powered by a jeep battery.

Bill tells a poignant story about Junior from their time in Vietnam. Gibson and several others were returning to their makeshift tents from the mess hall at their base camp called Two Bits North near the village of Bong Son. They noticed Junior standing over a small fire, face in the smoke. He was pouring leaves from a box onto the fire. When asked what he was doing, Junior told them that he just wanted “that smell of leaves burning from back home in Alabama.” He was remembering the same smell from the leaves his Dad would rake and burn every fall back home. Junior had asked a young lady from home to ship him a box of leaves. Unlike the foul smell of Vietnam, the burning leaves were a pleasant smell to Junior.

Horace Gilbert Giddens, Jr. [Junior] was born on November 13, 1945, to Horace Gilbert Giddens and Audrey Bowman Giddens in Andalusia, Alabama. He grew up at the family home located on South Cotton Street Extension, right across the road from the Fendley Drive-in on the Florala highway. Junior loved the outdoors, especially deer hunting and baseball. John W. Kelley was a childhood friend of Junior’s and remembers the baseball games they played in Clifton Maddox’s cow pasture. They were often joined by their friends, Kenneth Bozeman, Jake Maddox, Dudley Maddox, Harold Elmore and Billy Ray Norris.

After graduating from Andalusia High School in 1964, Junior attended Troy State for two years before joining the Army. His sister, Merle Giddens Johnson, remembers one of Junior’s deer hunting trips back home while he was still in college. He borrowed his mother’s new, white Chevrolet Bel Air to go hunting. After successfully killing a deer, he returned home with the deer tied to the hood of the car. Junior’s Mom was “a little distressed” when she saw the deer, bleeding all-over the hood of her new car.

Back in Vietnam, Junior was “hooch-mates” [hooch was the term for the temporary living quarters] with Bill Gibson and another friend, Leonard Davis. They both described Junior as the consummate gun-ship pilot. He had been selected to fly co-pilot with his Commanding Officer, Major Art Deel. In December 1967, Bill Gibson and Junior were selected for transition to the new AH-1G Huey Cobra. The Cobra was the Army’s newest attack helicopter.

On February 2, 1968, just 10 days before the new Cobras arrived, Junior, flew an armed reconnaissance mission out of Dong Ha. The crew included Major Art Deel as pilot, Junior as co-pilot, 1st Lt. Leonard Davis as Artillery Aerial Observer and right-side door-gunner and another soldier as left-side door gunner and Crew Chief. Davis was directly behind Junior when he heard the sound of a round hitting the right-side chin bubble on the helicopter and saw Junior slump over the controls. Davis quickly reached around Junior and removed his legs and arms from the controls so that the pilot could fly the ship. They immediately diverted to the Marine Aid Station at Dong Ha. The doctors worked on Junior after he was brought in but were unsuccessful. The bullet had penetrated the chin bubble of the helicopter, hit Junior’s Kevlar vest at a sharp angle and continued upward, entering the left side of his neck and lodged in his brain. Davis said that there was no external bleeding and that he believes that Junior died instantly.

At some point, Junior’s body was transferred to the Marine base at Da Nang. Due to some bureaucratic mix-up, it remained there for nearly a month before being shipped home.

On March 3, 1968, Junior Giddens’ funeral was held at Judson Baptist Church, followed by burial at Andalusia Memorial Cemetery with full military honors. His parents were later presented with two posthumous awards for Junior: the Bronze Star and the Distinguished Flying Cross. In addition to those, he had been awarded the U.S. Army Aviator’s Badge, Vietnam Campaign Medal, Vietnam Service Medal, Vietnam Gallantry Cross, the Purple Heart and the Army Presidential Unit Citation.

[The author would like to thank the following for helping tell Junior Giddens’ story: Merle Giddens Johnson, Junior’s sister and classmate of the author; Mark Johnson, Junior’s nephew who has helped keep his memory alive; Bill Gibson, Junior’s closest friend through training and their service together in Vietnam; Leonard Davis, Junior’s friend and crewmate on the fatal flight; and John W. Kelley, childhood friend of Junior and fellow Vietnam veteran from the 1st Air Cavalry Division]. 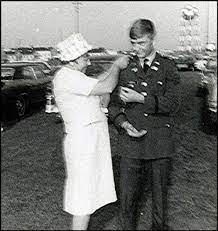 WO1 Junior Giddens has his Army Aviator’s Wings pinned on by his mother, Mrs. Audrey