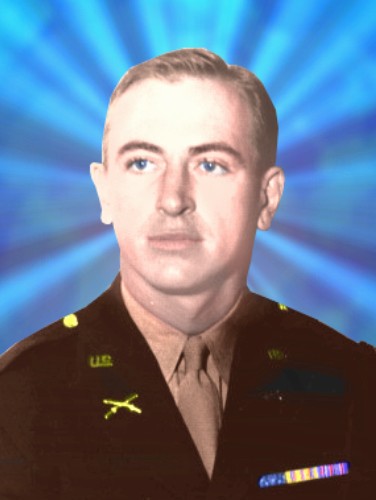 Combat tactics was taught by the Allied and Axis powers during WW II. What couldn’t be taught was the individual heroism often exhibited by the American soldier. When confronted with overwhelming odds and impossible battle conditions, he often responded with a fearless heroism that had not been learned in a military school. Such a soldier was Captain Charles W. Davis – a man who later failed to pass an exam on infantry tactics, but whose courageous actions in the Battle of Guadalcanal earned him our nation’s highest honor.

Charles Willis Davis was born February 21, 1917 in Gordo, Alabama. He played center and linebacker for the 1933 Gordo High School Green Wave football team. In 1934, his family moved to Montgomery, where he attended Sidney Lanier High School. He played center for the football team and was a pitcher on the baseball team. He graduated in 1936 and entered the University of Alabama where he was a pitcher for the baseball team. He had completed three years of pre-law and one year of law school before he was commissioned a 2nd Lieutenant through the Army ROTC program. He was sent to Ft. Benning, Georgia for infantry training and upon completion, was sent to Ft. Sam Houston, Texas. It was there that he met and married Joan Kirk in June 1941. Later that year, the young couple was sent to Hawaii where Charles was assigned to the 25th Infantry Division located at Schofield Barracks in Honolulu.

When the Japanese attacked on December 7, Davis was stationed on perimeter defense at Ft. Shafter. His wife, who was pregnant at the time, was located at their residence at the barracks. She rushed outside, amid all the noise and was forced to dive for cover when Japanese planes strafed the barracks. She and other family members of military personnel were evacuated to Honolulu later that day. On the following day, she gave birth to their daughter, Carol.

In November 1942, Davis was deployed to Guadalcanal as Executive Officer, 2nd Battalion, 27th Regiment [the Wolfhounds], 25th Infantry Division. He landed with the lead elements of the 25th Infantry Division on December 17, 1942. His battalion was under the command of 25th Division Commander, Maj. Gen. Lawton Collins and was part of the newly formed XIV Corps, commanded by Maj. Gen Alexander Patch. The fresh Army forces were sent to relieve the exhausted and decimated 1st Marine Division.

One of the first orders given by Patch was for the seizure of three objectives near the Matanikau River – Mount Austen, the Galloping Horse and the Sea Horse. All three objectives were named for their geographic features. Davis’ unit, the 27th Regiment, was told to assault the Galloping Horse, a 900-foot-tall hill said to resemble a running horse.

The attack began on January 10, 1943, and by the next day, Davis’ 27th Regiment had captured Hills 51 and 52. Heavy fire from Japanese machine guns and mortars, combined with a shortage of drinking water, stopped any further progress. Davis volunteered to move to the front and realign the two companies that were caught in the Japanese crossfire. Sprinting forward 300 yards to the front, Davis established an observation post and directed 81mm mortar fire upon the Japanese atop Hill 53. The Japanese in turn, directed their own fire upon Davis’ position, killing a young Lieutenant who died in Davis’ arms.

By January 13, the battle was at a stalemate and the unit commander, Lt. Col. Mitchell, devised a new approach. Companies E and F were sent out to encircle the hill and Captain Davis, with four volunteers, would lead a frontal assault.

Davis and his men crawled on their bellies through the tall Kunai grass until they were close enough to lob grenades onto the Japanese positions. In turn, the Japanese lobbed two grenades back that landed among Davis and his men. Fortunately, one grenade was a dud and the other did not fully explode. Sensing the danger, Davis and his men sprinted to a nearby ridge where they were able to directly fire on the surprised Japanese below. Davis’ rifle jammed but he quickly drew his pistol, killing a nearby Japanese soldier. With the Japanese on the run, Davis and his men continued down the back slope of Hill 53 and onto the summit, some 250 yards away. Just as the men reached the top of Hill 53, the heavens opened up with a torrential rainstorm, bringing precious water to the parched men of the 27th Regiment.

The actions of Captain Davis were not just visible to the two companies of men near the base of Hill 53, but also to Gen. Collins and his staff. Davis’ silhouette had stood out, atop the ridge, clearly visible to the men below who were emboldened to take Hill 53. Davis’ bold and courageous action had been the spark that ignited the entire 2nd Battalion to take Hill 53. The attack on the Galloping Horse ended in a decisive victory for Davis and the 27th Regiment. After the attack, more than 170 Japanese bodies were found on and around the Galloping Horse.

After Guadalcanal, Davis was promoted to Major and awarded the Medal of Honor on July 17, 1943.

Upon his return to the States, Major Davis attended the Command and General Staff College at Ft. Leavenworth, Kansas. After their studies, Major Davis and the others were given an exam including a question on infantry tactics. The problem concerned an assault upon an enemy position. After the exam, Davis said, “The action described in the test was the same one I fought through on Guadalcanal. Now the way I fought that action isn’t the way the School teaches it.” When the exams were returned, most of the class received “Satisfactory.” Major Davis – the only man in the school who had actually undergone the “problem” in battle – received an “Unsatisfactory.” Not to be embarrassed, the school explained that “The Medal of Honor is awarded for personal valor and has no direct relationship to tactical decisions in battle.”

In 1964, the Alabama legislature designated Alabama Highway 86, from Gordo to Pickensville,

The Charles Willis Davis Medal of Honor Highway. Montgomery also claimed Davis as one of their own and dedicated an Alabama Historical marker to him on Veterans Day, 2008. Davis was also a 2020 inductee into the Army ROTC National Hall of Fame.

Davis died of a heart attack on January 18, 1991, at age 73, and was buried at Arlington National Cemetery. He was survived by his wife, Joan; a daughter, Carol Denier; a son, J. Kirk Davis; a sister, Francis Downing; a brother, Emmett Davis and five grandchildren. 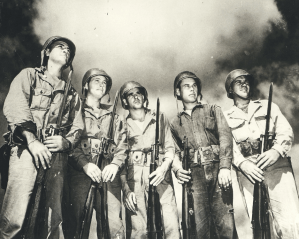 Captain Charles W. Davis [middle], with fellow soldiers on Guadalcanal during WW II. Capt. Davis would receive the Medal
of Honor for his heroic actions during the Battle of Guadalcanal.
[Photo: mohmuseum.org]