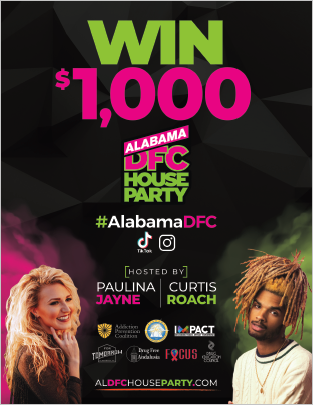 Several Alabama organizations, including Drug Free Andalusia, have joined forces to create the Alabama DFC House Party, a virtual talent showcase, where students ages  13 – 18 pledge to stay drug free by submitting a version of their talent on social media.

Every October, coalitions, non-profit community organizations and the education department host daily activities over the third week of the month to support “Red Ribbon Week,” the largest drug-abuse prevention campaign in the United States.

Teens are invited to post a video of them singing, dancing, rapping or other performance on their Instagram or TikTok handles and tag the video with #alabamadfc. The top entries will move to the finals, where entrant’s video’s will be shown on the Alabama DFC House Party YouTube page. The general public can vote for their favorite video, by simply “liking” the video. The video with the most likes on November 2, 2020 will win a $1000 VISA Gift Card.

Submissions will begin on Wednesday, October 7, 2020 and run until Sunday October 25, 2020. Beginning, Monday October 26, 2020, the public can start voting for their favorite video. On Monday, November 3, 2020 the grand prize winner will be named and awarded.

“By the time students hit junior high, they want a little more from Red Ribbon Week than dress-up days and stickers,” Andalusia High School Peer Helper sponsor Charlotte Spurlin said. “Their interests lie in social media; our interests lie in drug-free activities. I think the Alabama DFC House Party is a home run for all! We hope that several students will participate.”

The team was able to secure quarantine YouTube superstar, Curtis Roach and country’s rising star, Paulina Jayne to host this event on social media throughout the entire campaign for Alabama DFC House Party. Roach, best known for “Bored in the House,” became an overnight success when his hit song passed the million “like” mark on YouTube in March. Jayne, became a songwriting machine at the early age of nine. Throughout her career, she’s opened for major names including Sheryl Crow, Rascal Flatts and Chris Lane. Jayne has also found great success by launching her material on YouTube, reaching over a half a million mark for her hit, “Loves Gonna Always Win.”

Members of Drug Free Andalusia include:

Spurlin said people are more than welcome to join Drug Free Andalusia and for more information can contact her at spurlinc@andalusia.k12.al.us