Preston S. Thomasson was youngest of 11 children in… 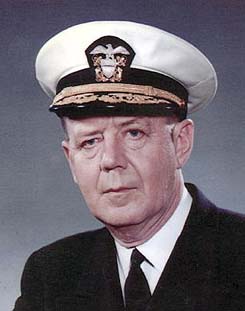 The story of Henry C. Crommelin

Henry C Crommelin will be the fourth of five  Crommelin brothers we have written about.

All five brothers from Wetumpka, Al. graduated from the US Naval Academy and served in the Navy during WW II. In prior articles, we have written about Charles and Richard, both of whom lost their lives in aircraft accidents during the war, and John, who made a name for himself as a Naval aviator during the war.

Henry Claiborne Crommelin was born to John G and Katherine V Crommelin, Aug 11, 1904 in Montgomery,AL. He attended schools in Montgomery before graduating and enrolling at the University of Alabama. After a year, he was appointed to the US Naval Academy in 1921. He graduated with distinction in 1925, ranking 18th in a class of 453 midshipmen. After his commissioning, he served aboard several warships prior to WW II. He had wanted to enter flight school, like his brothers, but his poor eyesight placed him in the surface fleet. Henry was married to Sally Huntress [no exact date] with whom he would have four children.

During the time before the war, Henry served aboard two battleships, the USS Tennessee [BB-43] and the USS California [BB-44] and as Chief Engineer aboard two Navy destroyers. He was assigned to the US Naval Academy from 1933-36. For the next four years, Henry was assigned to the west coast, serving as an Aide and Flag Lieutenant aboard USS Pennsylvania [BB-38] and as Executive Officer aboard the destroyer USS Preston [DD-379]. Henry returned to the east coast in 1940, serving in the Bureau of Navigation [later the Bureau of Naval Personnel] in Washington, DC. In Jan 1942, he reported to the USS Fitch [DD-462], in the Boston Naval Shipyard and became her Commanding Officer upon her commissioning in Feb 1942. Crommelin and Fitch served in the Atlantic doing convoy duty and participated in the invasion of N. Africa during Operation Torch. In Dec of 1942, Crommelin  assumed command of USS Guest [DD-472] , at her commissioning. They served in the Atlantic until May 1943 when they were transferred to the Pacific Fleet. Crommelin was detached from the Guest in Aug 1943 to assume command of Destroyer Division 50.

During the Battle of Tarawa, Crommelin took his flagship, the Ringgold and another division destroyer, the USS Dashiel [DD-659] , into an uncharted lagoon at Tarawa, and for four days, provided “vigorous bombardment of shore installations and contributed to the success of his division in silencing several enemy batteries and in carrying out all assigned fire support tasks”. For this action, Crommelin was awarded the Silver Star. During this action, Dashiel  was struck by a Japanese 5 inch shell that failed to explode.

While still aboard Ringgold , Crommelin was awarded the Bronze Star for his heroic actions as COMDESDIV 50 against Japanese forces on Guam in July 1944. While participating in the Marianas Campaign at Guam, Crommelin was recognized for his actions as Boat Control Officer during the assault, skillfully directing the invasions boats during D Day.

In Aug 1944, Crommelin assumed command of Destroyer Division 25 and took part in the Battle of Leyte Gulf. After that, he was transferred stateside where he served as the head of the Officer Distribution Division in the Bureau of Naval Personnel.

After the war, Crommelin served as Chief of Staff and Aide to the Commander Destroyers, US Atlantic Fleet from Dec 1946-Nov 1948. From there he was assigned to the US Naval Base at Guantanamo Bay, Cuba, where he served as Chief of Staff to Naval Base Commander as well as Commanding Officer of the Naval Station. In Oct 1950, Crommelin took command of the heavy cruiser,  USS Des Moines [CA-134], which was a part of the Atlantic Fleet. While aboard Des Moines , he joined the US 6th Fleet in the Mediterranean Sea, and took her through the Adriatic Sea to visit Yugoslavia. They were the first US ship to visit Yugoslavia since the end of the war. In Oct 1951, Crommelin was assigned to Headquarters, Commander in Chief, Pacific Fleet [CINCPACFLT] at Pearl Harbor.

In Jul 1952, Capt. Henry Crommelin was promoted to Rear Admiral and assigned as Assistant Chief of the Bureau of Personnel in Washington, DC. His last sea duty was as Commander Battleship Division 2, from Jan 1956-Jun 1957. In 1957, Crommelin was promoted to Vice Admiral and became Commander of the Newport Naval Base, where he served until his retirement in 1959. The rank of Vice Admiral was the highest rank obtained by any of the Crommelin brothers.  During his time as Commander of the Newport Naval Base, Adm. Crommelin escorted President and Mrs. Dwight Eisenhower during a tour of the base in 1957. In Mar 1958, Adm. Crommelin officiated at the commissioning of the destroyer USS Mullinix [DD-944] , which was named for Adm. Henry Mullinnix, who died when the USS Liscome Bay [CVE-56] was sunk at the Battle of Makin Island in 1943. In a note of irony, Adm. Mullinnix’s widow, Mrs. Kathryn Mullinnix was the sponsor of the ship named for her husband and the Admiral conducting the commissioning, Adm. Henry Crommelin, was the brother of Cdr. John Crommelin, the most senior officer to survive the sinking of Liscome Bay.

After Henry Crommelin’s retirement, he and Mrs. Crommelin moved back to Elmore County, AL. where they lived until his death in Mar 1971. Sally Huntress Crommelin died in Jun 1983. She is buried beside her husband at Arlington National Cemetery.

[Sources: The Encyclopedia of Alabama, Bill Tunnell, USS Alabama Battleship Comission; The Crommelinfamily.org; The US Naval History and Heritage Command]