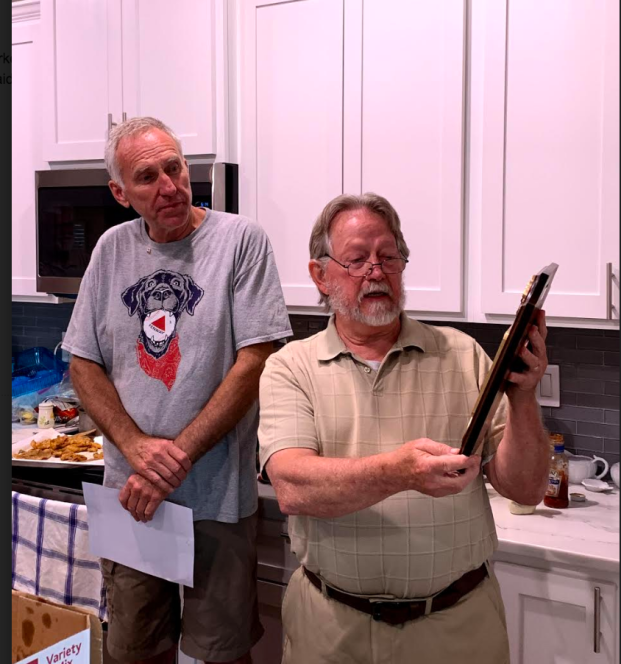 Dirk Price of the Andalusia Lions Club said that last February the local club made a $1,000 donation to the Lions Club International Foundation.

Upon making the donation, the club was given the privilege of awarding the prestigious fellowship award to an outstanding person in the local community.

“In line with Lions’ mission to serve sight conservation, youth, disaster relief and humanitarian efforts, the Andalusia Lions voted Terry Pickard to receive the award,” Price said. “Terry’s community service includes youth soccer and baseball coaching; organizing a school trip to meet an SR71 blackbird spy plane pilot with an additional high school trip to see the Blue Angels; selling roasted coffee to raise money for parents wishing to raise foster children; volunteering for the full Tummies program; becoming certified with the community emergency response team and working on many trips to help Hurricane Michael victims, as well as those devastated by tornadoes around the state.”

He served as a member of the Board of Directors at Blue Lake Methodist Camp, where he did a roof renovation, bunk bed project, and some controlled burning of their woodland.  Pickard volunteers for countless church projects, Habitat for Humanity, building wheelchair ramps for shut-ins, and delivering food to the elderly.

For the last six years,  he has assisted with  visually impaired persons fishing tournaments and the Lions physically challenged deer hunt.  He has made financial contribution to the Andalusia Lions free eye glass project.

“This deserving recipient of the Melvin Jones Fellowship has shown continuous service to the Andalusia area and beyond for the last 40 years,” Price said.

As the Covid 19 virus has postponed the Andalusia Lions annual banquet, the award was presented to Pickard by Lion Kylan Lewis at a family fish fry Saturday night on Gantt Lake.  Terry’s entire family was present, including his wife, Tammy; two sons, Jim and Gene; their wives; four grandsons, and friends.

Melvin Jones is the founder of Lions Clubs International.  It is the largest

service organization in the world, serving in more than 208 countries.

The Fellowship award is the most prestigious award in Lionism.  Pickard remarked that his father and grandfather had taught him community service, and he said that “it all flows downhill.”  Two of Terry’s Foster grandchildren (ages 5 and 7) stepped up and spoke on how they respected their grandfather.