Just stop it, USA; be thankful

Nature cares nothing for human nonsense

The natural world does not pay one bit of attention to all the human hoopla. That is what occurred to me as I sat beside the water in my Adirondack chair Sunday morning. It was mid morning and still cool enough to be comfortable.

Inside, Face the Nation, Meet the Press and an assortment of church services were on television if I wanted to go in and spend the beauty of this morning listening to all the stuff humans have to say — to all the hoopla. I opted for water, trees and blue sky instead.

Of course, I had the company of a cat. I always have the company of at least one cat when I venture anywhere outside. This morning, it was one of the two girls, Lucy, who chose to honor me with some of her attention. She rubbed herself back and forth between my outstretched legs before settling down beside me.

As we sat together looking, I wondered what she thought about what we observed. I heard a deep purr vibrating through her. Was she wondering what I was thinking about as I stared into the water? Nope, cats do not concern themselves with what humans think.

The longer I sat quietly looking, the more I started to see. There were fish swimming so close I could reach out and touch them. Of course, much movement from me sent them rushing for cover under a nearby log.

Then paying closer attention, I noticed all the different kinds and sizes of fish. There were some that looked like small bream. Nearer the bank swimming in the shallowest water, there were minnows. As I looked straight down in front of me, I saw what looked like hundreds of the tiny fish. They were smaller than a sliver of fingernail, almost transparent.

“Ah, they must be newly arrived on the planet,” I thought. “Just hatched into life.”

I knew the larger fish were probably hanging around because they planned to make a breakfast out of these babies and possibly a minnow or two as well. Just as I had that thought, a dragonfly swooped down to gobble up a black bug that was gliding on top of the water.

That is when I noticed all the dragonflies that were landing on the tall grass beside where I sat. There were small heather blue ones and larger ones that looked almost navy blue. Some were bright green and some had spots on their wings.

Everywhere there was life. There were fish and dragonflies, black bugs sitting on the water’s surface, a turtle sunning on a log, birds hopping around in the branches overhead, a cat sleeping at my side.

“You don’t need a church building to worship,” I whispered to the cat.

No, at that moment, I was worshiping in the temple of nature, listening to the choir of creation singing. The wind moving through the trees preached the sermon.

“There is no separation,” it said. “Everything is divine energy.”

I felt my heart beat in harmony with everything, with the life unfolding around me. I closed my eyes and felt the breeze on my skin.

Humans get bogged down in the stuff they create, the problems, the arguments, and the separation. Sometimes, I just need a break from what passes for civilization. Perhaps, we might have a better world if humans took a break and spent a bit of time sitting with fish and cats and frogs.

No, the natural world is not paying one bit of attention to the human hoopla. Fish are hatching and birds keep flying no matter what’s happening on Twitter.

And long after I am gone, the temple of nature will stand and the choir of creation will sing. So while I’m still here, I am going to try to spend more time listening to that sermon from the wind that reminds me I’m as much a part of it all as the dragonfly that just landed on my chair.

Nancy Blackmon is a former newspaper editor and a yoga teacher 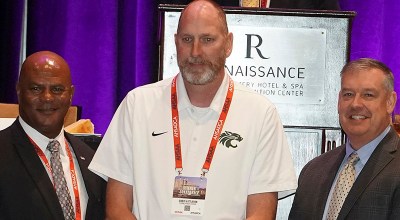