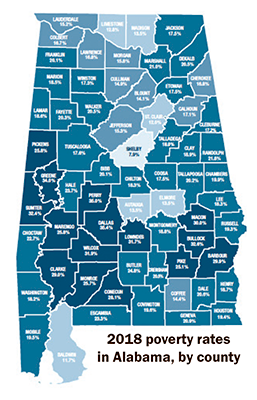 Alabama is 6th poorest in nation

According to the data sheet, Covington County’s poverty rate for 2018 is 19.6 percent, and Economic Development Commission President Rick Clifton said that a lot of the reason for the drop has been retaining employers in the county.

“We have maintained the same population over the year, so that has helped,” Clifton said. “But most importantly we have retained a level of employment that makes people want to come to our county to work.”

Clifton said that the commission’s main job is to bring in new businesses to the county and to help them expand.

“American Apparel in Opp has expanded and brought a lot of employment to the county,” Clifton said. “As well as Global Aerospace. It is what we do, and if we keep doing it, we will keep on seeing that number decrease.”

Along with the poverty rate, the unemployment rate has also decreased by 1.8 percent.

“I say we have gotten more jobs over the last couple of years,” Clifton said. “Even though we lost Sitel and Vector we are having people getting into different industries in Covington County, and that is why we hold job fairs so we can give the people that lose their job an option to stay in the county instead of leave.”

The EDC currently has six active projects and Clifton hopes that they will bring more job opportunities to keep the unemployment rate down.

“We are in good shape in the state as far as unemployment rates go,” Clifton said. “People always say, ‘Six projects? It seems like you are working too hard.’ But I always tell them that we have to bring new industries to the county and hard work is what it takes.”

According to the data sheet, food insecurity has also dropped .7 percent.

Leroy Cole said that the Covington Baptist Association’s food bank has been working hard across the county to ensure that people have access to food.

“This year we have about 800 families that we provide food for,” Cole said. “And last month we gave out less food than we usually do, which is a good thing.”

Cole said he does not know if they had any help in dropping the food insecurity rate but the food bank provides a service to the community.

“The purpose of the group is to take care of the needs of the less fortunate,” Cole said. “And if we make a difference doing God’s will, then that’s all that matters.”

The county with the highest poverty rate was Perry County with 40 percent.

The county with the lowest poverty rate was Shelby County with 8.5 percent.

FIRST OF ITS KIND, HERE

PROTECTING OTHERS: In midst of bill proposal, roommate of slain Blanchard speaks about losing friend

U.S. Congress candidate: ‘Stand with me’

Remember When: Valentines Day 100 years ago

Eat healthy without breaking the bank