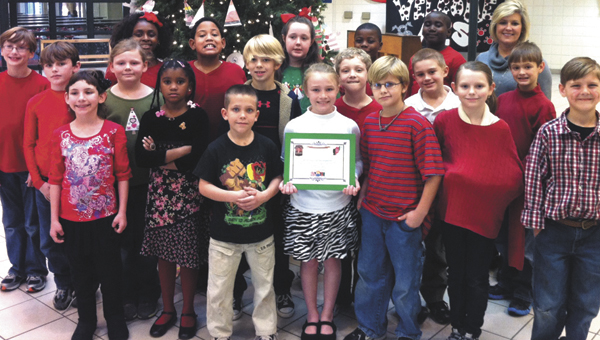 Mrs. Weed’s third grade class with the certificate of appreciation from the 278th Signal Co., “Spartans,” stationed at Camp Eggers in Kabul, Afghanistan, for the Veterans Day posters sent by AES students. |

While most are throwing out sparks of holiday spirit, students at Andalusia Elementary School are doing one better by combining that holiday spirit with a heavy dose of patriotism.

Recently, students in the second, third and fifth grades have worked to give service members serving as part of Operation Enduring Freedom how much they appreciate what they do for all Americans.

This week, students were presented a certificate of appreciation from the group.

“Your generosity symbolized the will and resolve of the American people to stand strong, defeat all who attempt to bring us harm and bring peace, security and stability to the people of Afghanistan,” the certificate read.

And on Friday, Santa got a little help from students in the second and fifth grades that, instead of exchanging presents among themselves, elected to bring a gift for a soldier.

Second grade teacher Ashley Black said the project was a group effort among all the teachers.

“The students were very receptive of the idea,” she said. “It was actually the second year we did it, and support this year was great. I think our service men (and women) will be pleased to receive all those goodies.”

The items were picked up by local veterans and taken to Pack-N-Ship, who will ship the items. Both projects were facilitated by Paul Spears Jr., an Andalusia resident currently working for a private company in Afghanistan, who hand- delivered the posters to a neighboring unit and helped coordinate the distribution of gifts to an Alabama National Guard unit stationed in Kabul.

John Hall, a two-tour Vietnam vet and Purple Heart recipient, helped Friday with the collections at the school.

“It’s an incredible feeling, when you’re serving, to know that someone at home thinks enough of you to send you something,” Hall said. “I would get something from my mom and my aunt when I was in, but to get something from someone that you don’t even known, would do wonders for morale and for what you were put there to do.”

“I’ve been there – it means the world,” he said of the donations. “You’re there to do a duty, to serve our country. When roll call came around, it didn’t matter if it was a letter or cookies. It came from home and that meant the world.”

The local Adopt-A-Deployed-Family group is covering the shipping costs, which is estimated at $200; however, donations are still being accepted at Pack-N-Ship to help cover the costs.