Legislators give $55K to schools 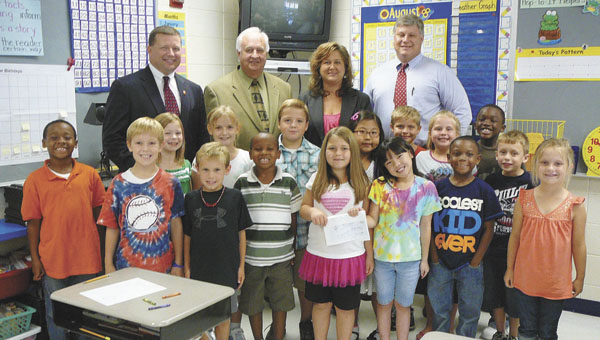 “This money does two things,” Holley said. “The state education budget was not enough. These funds are to be used to fill the void due to lack of funding. It addresses the subject of teacher supplies, while addressing the needs of some special projects that didn’t get funded in the budget.

“I, like Rep. Jones, felt like the impact of this money needs to be felt in the classroom,” he said. “Now, it will.”

“We call this general purpose money to be used directly for purchasing school supplies and to make up the difference where there is a specific need,” Jones said.

The first stop made by Jones and Holley was to Andalusia Elementary School, where the men distributed checks totaling nearly $12,000.

Students in Mrs. Black’s second grade class – like others throughout the county as Jones and Holley made stops at Straughn and in Opp – had one thing to say after the presentation: “Thank you!”